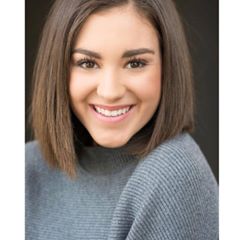 A Minneapolis native, Alana Christie was a competitive figure skater for fifteen years. She is a double gold medalist in both freestyle and moves in the field. After a dozen plus years as an accomplished freestyle skater, Alana skated two seasons for Team Braemar Junior where the team was the 2011 World Junior Bronze Medalists and the 2012 U.S. Synchronized Skating National Junior Champions.

Additionally, Alana was also selected for the 2017 WIN (World, International, National) Program, which aims to educate US Figure Skating coaches through first-hand experience at a World Event. Alana attended the World Junior Synchronized Skating Championship in Canada, along with three other coaches and one US official. The group had the opportunity to watch all of the practices and the entire competition, while constantly evaluating and assessing the teams under instruction and guidance of a highly acclaimed national and world judge and technical controller.

Alana truly has great love and passion for the sport of synchronized skating and is committed to giving competitive Twin Cities' skaters an opportunity to be part of this incredible sport.

To find out more about the Northernettes visit their website: